The Police Podcast brings together police officers, the agencies they represent and the communities they serve. We discuss current events, social media, best practices when dealing with the police and the lives our officers live. When we aren't talking with officers, we talk to business leaders in industries that can have positive impacts on helping agencies and officers do better jobs. Experts from communications, finance, equipment and training bring their real world knowledge to help inform and educate our nation's protectors.
Facebook Twitter Email RSS Feed
The Police Podcast
2018
April
March
February

Police in South Florida are encouraging parents to check the online accounts of their children after three teens were accused of creating an Instagram account to solicit and post explicit photos of other minors.Pembroke Pines police arrested two boys, ages 12 and 15, and a 13-year-old girl Thursday. They face charges of electronic transmission of child pornography.The arrests followed a 10-week investigation.Police say the social media account encouraged its 500 followers to post nude and sexually explicit photos of minors to "expose" them. The posts included their names and personal information.

Give me a freaking break!!! Come on parents....you can do better. Get invloved in your kids lives. Pay attention, be responsible.

Need help? Here is the link to my Cyber Safety For Families eBook.

Point To Ponder 13: Choosing where to put your video efforts 0

On today's Police Podcast Point To Ponder, we talk about video and the best way to share it.

At the end of 2014 a study showed that native Facebook Video uploads surpassed that of YouTube. What does this mean? Plenty.

Facebook continues to show it's domination and control of the social space and has now taken on the video big gun.

Does this mean that you shouldn't be using YouTube? Absolutely not...you need to ustilize the power of both platforms.

Don't ever forget that YouTube is a Google property and anytime you can add Google juice to your work, do it.

Today's point to ponder was inspired by the movie, American Sniper.

In one of the scenes, a young Chris Kyle was at the table with his younger brother, mother and father and his dad was giving a life lesson on the three roles of society...the sheep, the sheepdog and the wolves.

I got to thinking that there is a missing role in that tale and that is of the Shepherd.

I belive that the Shepherd is who police ost ought to be like, not the sheepdogs as they are so often believed to be.

Transparency is operating in such a way that it is easy for others to see what actions are performed. It has been defined simply as "the perceived quality of intentionally shared information from a sender".

In today's world of social media it is paramount that we are transparent in our actions to help build relationships and most importantly, trust.

Babies cry for it, grown men die for it...recognition.

Think about the power that recognition can give to your employees and it doesn't have to cost you a cent. A pat on the back, a verbal acknowledgement is all it takes sometimes to show how much you appreciate the work of your people.

This can create powerful brand ambassadors, defenders of your brand and a ore loyal and productive member of your team.

Superbowl XLIX is in the record books and the only takeaways I got from it are Seattle lost (New England didn't win) and the worst play call inhistory was also the best play call in history.

The US Army deletes a tweet that was viewed as offensive to some, which means that it needs to be considered offensive to all. 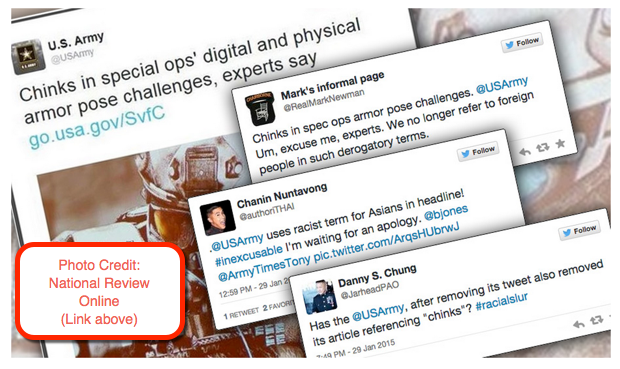 This is story that was sent to me by a friend on Facebook (Dave Turner (THANK YOU))...and it is a story that needs to be shared!

CORNWALL, Ontario - A collection of Cornwall police officers went above and beyond the call of duty on the weekend - helping an elderly couple buy back a wedding ring that was pawned to buy groceries.

Coun. Andre Rivette updated city council on the story Monday night, which goes something like this:

City cops were attending what they believed was a domestic call at a Cornwall home involving an elderly couple who were in the midst of an argument.

Upon visiting the home police discovered that an elderly woman was suffering from dementia. They further determined that the husband had recently pawned his wedding ring in an effort to purchase groceries.

The couple had been married 54 years and the husband admitted he was finding it difficult to not only care for his wife, but to put food on the table.

Police quickly began canvassing among themselves and raised $150 to purchase groceries for the couple, as well as $130 to buy the ring back from a local pawn shop.

Rivette's story was met with an ovation from those in the council chambers.

"This really shows that our officers have a heart," he said.

The officers who helped will receive a commendation from the police services board soon for their efforts.

The Alzheimer's Society and Community Care Access Centre are now involved in the case.

The Police Podcast Point To Ponder 7 0

Courage doesn't always roar. Sometimes courage is the quiet voice at the end of the day saying, "I will try again tomorrow."

We never know the troubles or challenges that someone is going through in their lives. Sometimes just getting out of bed is the most courageous thing they may do that day and you never know how a kind word, or a word of support will give them strength to keep on going.

To this end, I wish a dear friend great hope and courage as you face the road ahead.

The Police Podcast Point To Ponder 6 0

Everyday we have on this earth is a gift.

Like any gift we are given, we have to show appreciation and give thanks for that gift.

My personal beliefe is that it is a gift from God, so I give thanks for it, but no matter your belief, you can give thanks just by being great and doing the best you can do. Yesterday is gone, tomorrow is the future, but today is the present for which we have to be thankful.

Have a great day.

The Police Podcast Point To Ponder 5 0

“I alone cannot change the world, but I can cast a stone across the waters to create many ripples.” ― Mother Teresa

Consider the ripples you create with you actions and always strive to make waves of greatness!

The Police Podcast Point To Ponder 4 0

The challenge of leadership is to be strong, but not rude; be kind, but not weak; be bold, but not bully; be thoughtful, but not lazy; be humble, but not timid; be proud, but not arrogant; have humor, but without folly. —Jim Rohn

Many of our front line police officers have this ability within them and exhibit daily. The opportunity for leaders today to rise up and make an incredible impact has never been greater. There is a definite lack of real leadership and a great deal of room for it to be seized.

The Police Podcast Point To Ponder 3 0

Video is the present medfium that everyone strives to do better.  Video is also the future. Being able to do video great means having to be couragous in some cases and cautious in others.

That tells you just how important video really is. YouTube, Vimeo, Facebook, Instagram, Vine and Twitter all having strongholds on video marketing should make you consider what you need to do in video so that you can say, "I want my video to go viral".

The Police Podcast Point To Ponder 2 0

Today's PPPTP is from Matthew 5:9.

"Blessed are the peacemakers for they

shall be called the children of God."

Keep in mind that peacemakers cannot be confused with pacifists or panderers. To be a peacemaker means that from time to time you will get dirty and you will have to fight for peace.

The Police Podcast Point To Ponder 1 0

Walt Disney was a master motivator for his employees and a greater visionary for everyone. One of my favorite Disney quote's is,

The application of this for a police social media program is simple. Find out what your audience wants and then give it to them.