The Police Podcast brings together police officers, the agencies they represent and the communities they serve. We discuss current events, social media, best practices when dealing with the police and the lives our officers live. When we aren't talking with officers, we talk to business leaders in industries that can have positive impacts on helping agencies and officers do better jobs. Experts from communications, finance, equipment and training bring their real world knowledge to help inform and educate our nation's protectors.
Facebook Twitter Email RSS Feed
The Police Podcast
2018
April
March
February

MC - AKA Jason Hoschouer was the very first guest I ever had on The Police Podcast...

I knew at some point I would have him back on. We've kept in contact since that first episode and I've been an avid listener to his podcast, The Crossover Show that he co-hosts with Justin Bieber.

MC has been online talking about his duties since 2008 and letting the world know, "If got stopped, you deserved it." He talks about some of the current events that we've been seeing around North America, finances, quality of life and what he thinks are the most important things in life.

Last time MC was on the show he talked about his interest in financial matters after going through debt struggles and finding his way out through training he received from Dave Ramsey.

Well, MC is now taken this to the next level developing the, "Motorcop Mindset" which is a system to help people improve their lives.

MC has always been an author focusing on blog writing, but now he has just published a new book on focusing on budgeting for the first responders, "Badges And Budgets - Personal Finances From A Law Enforcement Perspective".

Here is the link to his book on Amazon.

I bought MC's book and it is filled with actionable content and financially sound advice. If all you do is implement what MC talks about in this book, you'll be better of than you are right now...take it to the next level and...well, let's not get ahead of ourselves.

BIG NEWS FOR OUR LISTENERS OF THE POLICE PODCAST...

Jason is offering a free webinar for you on Saturday July, 2nd at 1:00pm ET / 10:00am PT, in which he will walk you through The Motorcop Mindset and Budgets & Badges.

Here is the link that will take you the registration page.

MC is also a contributor to Uniform Stories. Check out his work there as well:
http://uniformstories.com/

Make sure you get on the list for his upcoming book to subscribing to his blog.

Thanks to MC for taking the time to join us on The Police Podcast!

I'd be honored it you would take the time to rate The Police Podcast and/or leave a review. It would help me be sure to focus on the content you want to hear.

Ep 89 - Speaking With The President 0

Mike McCormack is the President of the Toronto Police Association, the largest of it's kind in Canada representing over 8,000 members both sworn and civilian.

Mike comes from a deep policing tradition and like he mentioned in the interview, his dad went up the management side to become Chief and Mike chose the other side to become president.

I'm not sure which title I would rather hold, Chief or president. What the two men have in common is an incredible duty of service to others and Mike has taken the police association in a direction that has increased awareness of the importance to tell the message of what it takes, "to protect those, who protect others."

During this episode, Mike talks about the Toronto Police Transformational Task Force*, public safety, "Carding" and offers advice to other associations.

I hope you enjoy this episode.

* When this episode was recorded, Mike had not seen the final report so any comments he made at the time were not based on the report itself.

Two incredible power houses in their own fields joined forces to help parents writing the book, "Outsmarting Your Kids Online - A Safety Handbook For Overwhelmed Parents". 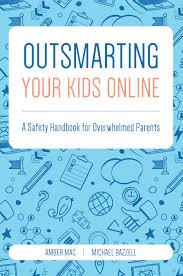 I read this book in about two days. I know some of you could do it in about three hours. It's an easy read but more importantly it's got immediately actionable things you can do to help protect your family.

Amber and Michael talk about the must do's, the need to do's and the should do's that can make an immediate difference in your awareness and knowledge of not only what is happening in your children's life, but what they are doing in their online environment.

More importantly than that, you can recognize the hazards and dangers that might be knocking on their virtual door trying to get into their real world.

Amber and Michael have shared their expertise in the cyber world with you in this book in a way that even the most tech challenged individual can get what they are talking about, relate it to your life and show you just how important the information is.

Think you know everything there is to know? Think again. I've studied both Amber and Michael. I've listened to them teach, I've read their books, I've taken their courses and this book still taught me plenty.

ABOUT MICHAEL AND AMBER...

Amber Mac(Arthur) started her career in San Francisco and Boston during the dot-com boom in the late 1990s. As a strategist for Razorfish and Director of Marketing for an e-procurement software company, she spent four years in the technology start-up trenches.

In 2010, she wrote the national bestselling business book Power Friending (Portfolio: New York).  Amber has keynoted more than 250 events around the world, in which she addresses the topic of business innovation and what it takes for companies to adapt and grow.

As an active investigator for multiple organizations, he has been involved in numerous high-tech criminal investigations including online child solicitation, child abduction, kidnapping, cold-case homicide, terrorist threats, and high level computer intrusions. He has trained thousands of individuals in the use of his investigative techniques.

Michael currently works and resides in Washington, D.C. He also serves as the technical advisor for the television hacker drama "Mr. Robot" on the USA network. His books "Open Source Intelligence Techniques" and "Hiding from the Internet" have been best sellers in both the United States and Europe. They are used by several government agencies as training manuals for intelligence gathering and securing personal information.

You can find them online everywhere, but for simplicity sake, I'll share their websites and their Twitter links:

BONUS: For you Mr. Robot fans, off air I got Michael to open up about Season Two...OMG!!! You will love it...well, at least I think you will. He wouldn't say a word other than he's excited about it and look for it JULY 13!!!

If you're not one of the first five to email for your free copy, then click this link to buy the book from Amazon.

Ben Gardner is probably better known as @TrooperBenKHP is one part of the Kansas Highway Patrol that has become infamous in law enforcement social media circles as, "The #TweetingTroopers".

Trooper Ben has been using Twitter as his primary tool for outreach to help educate, inform and entertain his community of followers talking traffic safety.

You can find him at crash scenes and community events, conferences and cruisers and you can always be sure that he will be talking about ways to stay out of jail, in your car and on the road safely.

While he is in uniform though, you won't find him in a donut shop but you will find him advising what the Chili Index for the day is.